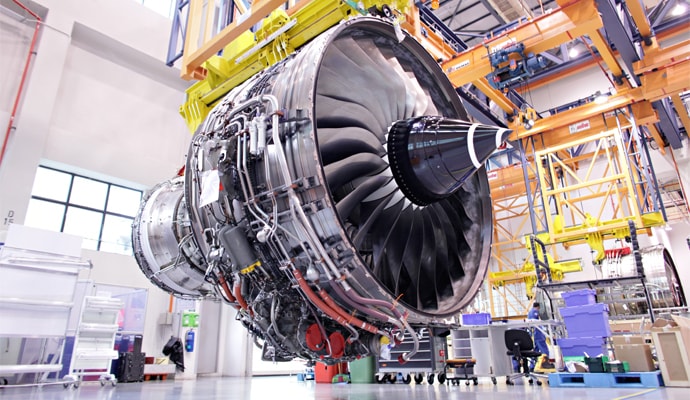 Rolls Royce Trent is a family of high bypass turbofan engines manufactured by Rolls-Royce, and all are developments of the RB211 with thrust ratings of between 53,000 and 97,000 lbf. The Trent series currently consists of the 500, 700, 800, 900, 1000 and the Trent XWB. The Trent uses a three-spool design rather than two, and while the Trent is a more complex engine, it benefits from a lighter weight, and a shorter, more rigid core which suffers less performance degradation than a traditional two-shaft design. The advantage of three spools is that the fan can be turned by its own turbine to rotate at its optimal (fairly low) speed; the two compressors are then driven by the two other turbines.

First run in August 1990 as the model Trent 700, the Trent was the launch engine for both of the 787 variants (Trent 1000) , the A380 (Trent 900) and the A350 (Trent XWB). The Trent XWB, for which SAESL has been selected to be the lead MRO facility, is the sixth generation engine of the Trent family and also the most powerful and the fastest-selling engine in the Trent series. It develops 75,000lb to 97,000lb of thrust and is regarded as one of the world’s most efficient large aero engines. Custom-designed for the A350, more than 1,600 of the engines have so far been ordered.